Agvocacy 2.0 Contest - Dear TLC, I'd Like to Pitch a Story

This post is an entry for our Agvocacy 2.0 Contest. Contestants are sharing their favorite Ag story with us to be entered. The contestant whose blog post receives the most comments, likes, and tweets will win.

Dear TLC Producers,
I'd like to pitch a story idea, but first I need to give you some background on the situation

We have a small group of cattle that we brought over to the pastures near our house this summer. This small group was held back and not sent to other areas in Kansas or Oklahoma where the rest of the cattle are pastured. The group near our house consists of a few cows from a group that Adam's dad had purchased out of Missouri a while back. These were the cows that had either lost a calf this winter or just didn't calve.

The group also consists of some heifers female cows that have never calved. They were brought home last fall after being pastured in southern Kansas. They were the heifers that Adam and I fed during the "Blizzards of Oz"this past winter.

Side note: If the heat is really getting to you, I recommend that you just click hereto remember why this past winter had everyone grumbling too.

Anyway, these were the heifers that Adam and his dad let me pick out to keep and breed so they can calve next year. 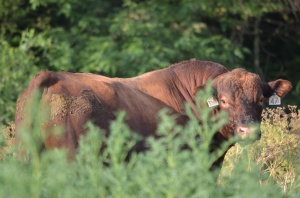 The gestation period for a cow is approximately 280-285 days, but the majority of gestation tables for beef cattle are for 283 days - in other words 9.5 months. 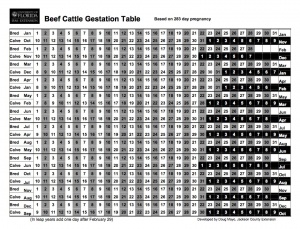 This revelation takes women saying, "I'm such a pregnant cow," to a new level doesn't it?

Since the bull was introduced to the group in May, the goal is to have everyone calve in February, March and April. ?But that?s only if the females cycle and the bull can get the "job" done. 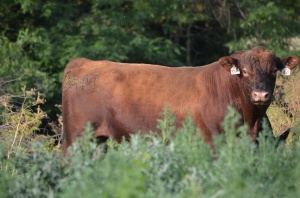 "Hey lady, that's a lot of pressure. Put the camera away, I'm working here and I don't want it to affect my mojo!"

It's no secret that this summer has been super HOT. It's been so hot for so long that a lot of ponds and creeks in our area are drying up. Our ponds and creeks aren't any different -they're drying up, too. In fact, the pond that Adam proposed to me at just last year has pretty much disappeared.

Last year it was full of refreshingly clear, cool, life-giving water. This year it's become a mud hole. 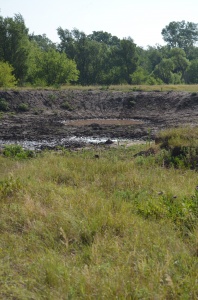 We have additional water that we provide to the cattle to guarantee that they stay hydrated; because if they don't get water during these hot days things could turn bad. Fatally bad.

One of my jobs this summer has been to check the group of cattle that are hopefully getting bred that are in the pastures near our house.

When I first started checking on them, it took me forever to ride around on the four-wheeler to even find them. In actuality, the majority of the time I'd have to get off the four-wheeler and sneak through the brush and trees to track them down. It was like I was on a safari!

In an Australian accent

I'm Kim Baldwin. Join me on our next exciting adventure as we trapse through the thorn bushes and use fresh hoof prints and cow patties to find the ever elusive beef cow. CRIKEY!!

When I would finally find them, a handful of them would freak out and take off running away from me!! 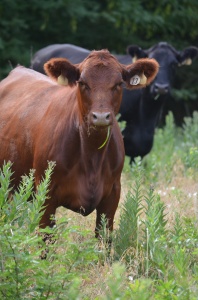 Thinking about high-tailing it outta here!

I was highly offended.

In these early days of checking the cows and inciting small stampedes and raising the potential for heat stroke I came across a major surprise that I mentioned in a blog last month: A little red bull calf hiding out in the trees!! 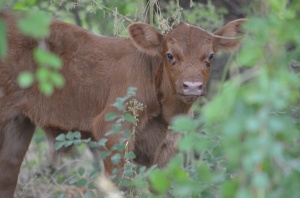 I immediately wondered where his momma was 283 days before (see gestation table above). This little guy was quite the surprise because our calving season is in the WINTER and NOT in the summer. Anyway, after discovering the little bull calf hiding in the trees, my job of checking cattle now included keeping my eyes open for him to make sure he's healthy, too.

I've found that it's easier to check on them when you don't have to hunt them down on more than 100 acres of pastureland and wooded areas. it's just too dang hot to get all riled up right now.

I've found that the easiest way to NOT have to track them down is to have THEM come to ME instead. Soooo, open up your psychology books for just a moment and I'll share with you my secret. Ready??

I've essentially been classically conditioning these cattle to come to me when they hear me call them and I reward them by giving them some range cubes. Anyone ever heard of Pavlov's Theory??

We've gotten to the point in the conditioning now that if they hear the Kawasaki Mule or any other motor that is similar to that of an ATV or UTV, they a come a runnin! 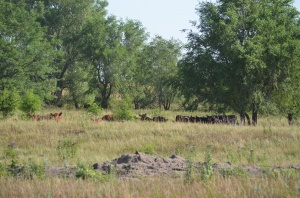 Do you hear what I think I hear?