This post is an entry for our Agvocacy 2.0 Contest. Contestants are sharing their favorite Ag story with us to be entered. The contestant whose blog post receives the most comments, likes, and tweets will win.

Eden's Chicken Chronicles - Part 1
My 8-year-old daughter wanted to start a scrapbook to chronicle her experiences with her new chickens, but I suggested that she write about it and share it with others. Our journey has been quite comical, and one sure to remember! 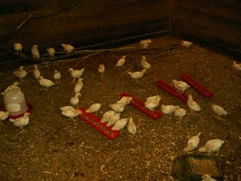 When I got my chickens, I saw a box with the word "egg" on it, so I was expecting one baby chick. I was surprised when I saw about 100 baby chicks. Mommy said there were 74; I loved them all. One of the baby chicks almost didn?t survive because it was cold. My mommy and I went to get to get a heat light and food at Tractor Supply and Feeder's Supply. Amazingly, the chick did survive.

The chicks lived in the tack room of the barn in two rabbit cages. One day me and mommy noticed one of the chicks had something stuck to his bottom. It was part of an egg shell. Mommy tried to pull it off, but she pulled its feathers off with it. Then we took it up to the house and gave it a warm bath so we could get off the egg shell. A wet chick looks very funny. It was the smallest chick, so I named it Teeny. This one was my favorite.

As the chicks grew, we had to move them into more cages. We had two dog crates that we used, but had to have daddy put wire around the cages because they were small enough to fit through the bars.

When the chicks grew some more, we moved them to a horse stall. We soon realized we had too many when they started eating each other. (NOTE: Mommy says she realized we had too many the moment she counted them all.) We tried to give them fruits and vegetables to peck on. They really like watermelon and corn on the cob. But don?t give them onion or potato skins because those can be toxic. We put tree branches in the stall, too. They like to climb on the branches.

Even though we tried to make them happy, we found a dead chicken yesterday. I think it died from cannibalism. We decided we had to give most of them away. We also found a chicken with a big puffy neck and he acted like he was having trouble swallowing. My mommy and daddy thought it was a big tumor. They thought it would be best to get rid of him, so we took him and another hurt chicken out to the woods. I cried, but I figured they would die anyway.

Earlier today, my daddy said the two chickens we put in the woods were still there, so mommy told him to take them some food and water. Mommy went to check on them later and the tumor was gone. We figured out that the chicken's crop was probably full of food. We decided to keep these chickens. Their names are now Lucky and Lucy.

We have another chicken that really likes mommy and me. We named him Fred which sounds like friend, because he is friendly. We are keeping him, too. We are keeping 15 chickens in all 2 roosters and 13 hens. A man came and picked up about 40 of the chickens this afternoon. Someone else will get the ones we aren't keeping tomorrow.

I really enjoy having chickens. If you think it sounds really fun, because it is, you should go and buy some. But it's really expensive. That's the main reason why we had to get rid of most of ours.