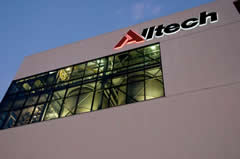 Alltech Algae in Winchester, Kentucky
Heterotrophic algae are grown in the 8 story tall stainless steel tanks visible through the windows.

Alltech Algae, our new plant in Winchester, Kentucky, is designed to produce heterotrophic algae. These algae are grown in large stainless steel tanks in a mixture of water, sugar and other nutrients. But, we are also growing autotrophic algae in clear plastic water-filled tubes as part of a pilot project with East Kentucky Power Cooperative. These algae live on sunlight, nutrients and CO2 that is produced by the co-ops coal-fired power plant. Exhaust from the plant is bubbled through the tubes and the algae consume some of the CO2 and NOx in the process.

One Algae's Waste is Another Algae's Food

It is pretty remarkable that algae are so diverse. This offers an opportunity to create a cyclical system in which waste from one process is used as a resource in the next process. Autotrophic algae could be grown on sunlight and CO2. If they were harvested for oil then the remaining biomass (carbohydrates and proteins) could be used to feed a batch of heterotrophic algae, who would return the favor by producing CO2 for the autotrophic algae.

In nature there is no waste. Everything becomes food for something else. How can we create more cyclical systems that naturally recycle resources?