Alltech to Sponsor the National Horse Show at Alltech Arena 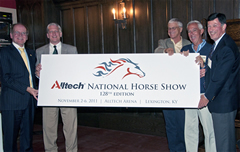 The National Horse Show was founded in 1883 in New York and has been held at Madison Square Garden throughout most of its 127 year history. Founded by affluent New York sportsmen, it was a highly anticipated Manhattan society event and in 1887 its directory was used as the basis for the first New York Social Register.

The National Horse Show (NHS) is the longest running indoor horse show in America and it has seen many changes over the years. In 1909, Alfred G. Vanderbilt, great-great-grandson of "Commodore" Cornelius Vanderbilt and president of the NHS, invited British Cavalry officers, the first international competitors.

From 1915 to 1925 the NHS was a military competition. Riders included famous Generals 'Black Jack' Pershing, Billy Mitchell and George Patton. The show has outlived three Madison Square Garden facilities. In 1989 it moved to Meadowlands Arena. In 1996 the NHS returned to the current Madison Square Garden and the show included a retirement ceremony for Cigar, the famous thoroughbred now residing in the Hall of Champions at the Kentucky Horse Park. In 2002 the NHS moved to Wellington, Florida.