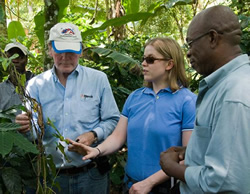 Jennifer Frederick - Alltech Applications Engineer (center)
"It has been such a pleasure to work directly with the guys from RECOCARNO. They have been nothing but helpful to us from day one and I believe this relationship we are forming with them will be one that will last for many years to come. They are passionate about their work with coffee at all stages: growth, harvest, processing, and exportation, and it is obvious they spend a lot of time making sure they send out the best coffee they possibly can. It makes a delicious cup of coffee!"

When you think of coffee, Haiti might not be the first country that comes to mind. But Haiti has an excellent climate for coffee and a network of small farmers that have joined together to form fair trade coffee co-ops. Many of these farmers work very small family farms, 1 - 5 hectares; and about 40% of them are women.

After the January 2010 earthquake a team of Alltech people went to Haiti to see how we could help. We wanted to do something sustainable: something long-term. One of the first goals was to find a way to support existing Haitian enterprises. We had just launched Bluegrass Sundown, a Kentucky Bourbon coffee drink. We were already purchasing coffee to make Bluegrass Sundown so it made sense to find a Haitian coffee producer.

We found Cacgava, Haiti's oldest coffee co-op located in Dondon, a village in the mountains of northern Haiti. Dondon sits at the base of Bonnet Mountain and is watched over by the magnificent and historic Citadelle Laferrière fortress that sits atop the peak.

Cacgava is one of 8 co-ops in the region, all of which belong to a network called RECOCARNO. The coffee is shade-grown, mountain-grown, Arabica. It is mild and has a nice aroma. It is grown naturally and certified fair-trade by FLO-CERT, an independent International Certification company.

So then we thought, if we're going to buy coffee why not launch our own brand of coffee? And Alltech Café Citadelle was born.