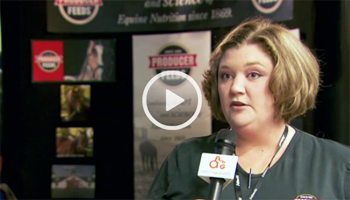 The escalating livestock market in the 1800s also brought with it many auxiliary industries such as feed, hay and straw businesses and hence the inception of Producer Feeds in 1869 in Louisville, Kentucky.

Here, Hillary Tucker from Producer Feeds tells us about their shift in focus to special needs equines and the excitement of being at the Alltech National Horse Show.