A Frantic Impression of the Alltech National Horse Show 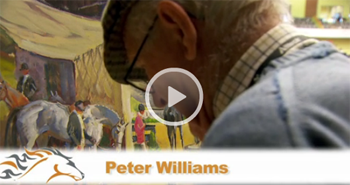 Peter Williams has been described as "able to capture the essence of the moment and this is his hallmark".

Peter, the official painter of the Alltech National Horse Show, told us how his love of painting began when he was child and cultivated when he became a sheep rancher in his native New Zealand. Following on from a successful painting career there, Peter later moved to New York where he was commissioned by The Racing Scene art gallery to paint racing scenes. Peter, a self-proclaimed "frantic impressionist", has since been the resident artist for more than 30 years at Churchill Downs, Keeneland, Del Mar, Saratoga and Monmouth Park.

Watch his video on the Alltech Ag Network!