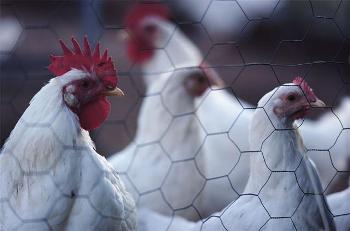 In a study published electronically on August 10th in Environmental Health Perspectives, collaborators from the University of Maryland, Pennsylvania State University and other institutions reported on a sharp decline in recovery of multiple drug resistant enterococci following adoption of an organic program. Samples of water, litter and feed were obtained from 10 conventional broiler farms and 10 farms recently converted to organic practice in Pennsylvania.

Two enterococci, E faecalis and E. faecium were isolated and antibiotic resistance spectra were determined. The proportion of multiple drug resistant isolates derived from the two farming systems are indicated in the table below. Multiple drug resistance was defined as involving at least three antimicrobial classes. The results of the U.S. studies were generally in agreement with research conducted in Europe following withdrawal of growth promoting antibiotics and stricter control over therapeutic administration.

The specific feature of the U.S. study conducted in 2008 is that loss of drug resistance occurred within one to two cycles of commencing organic production. Confounding factors in the survey included the fact that current breeders are often medicated with antibiotics and that virtually all broiler chicks receive either ceftiofor or gentamicin as a component of the diluent administered in ovo. It is significant that lincomycin-resistant E. faecium was isolated from water and that one water line sample yielded a multiple drug resistant E. gallinarum suggesting that water may be a source of drug resistant contamination. Mortality in the 10 conventional farms amounted to 2.5% compared to 4.7% in the organic farms. The organic farms had a longer retention of litter since the previous change (8 months) compared to conventional farms (1.2 months). Flock age was similar in both comparisons at 36 days but flock size (36,800 chicks) was larger in the conventional farms compared to the organic farms at 22,608chicks placed per house.

The authors concluded that removing antibiotics from feed and the environment of commercial broiler growing houses resulted in rapid transition from drug resistance to susceptibility among two specimens of enterococci.

It is presumed that the data will stimulate additional surveys, possibly with evaluation of different organisms including staphylococci, coliforms and Salmonella.

Irrespective of the extent of subsequent research, it is evident that regulators, public health administrators, and legislators will be provided with a justification to impose stricter rules on the use of antibiotics in broiler, turkey and swine production.