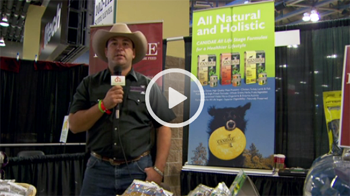 In 2010 CANIDAE Pet Foods rolled out its new EQUIDAE® line of steam extruded horse feeds. Steam extrusion is based on the same phenomenon that allows popcorn to pop. When heated, moisture in the corn kernel turns into steam and the pressure pops the kernel.

Popping expands the starch structure of popcorn into a honeycomb, increasing the surface area and making it much more digestible than raw, or even cooked, corn. Steam extrusion accomplishes the same thing for EQUIDAE® horse feeds. Higher digestibility means that more nutrients are absorbed and less gas is produced in the hindgut.

In this interview Mike DeNunzio, EQUIDAE sales manager, talks about CANIDAE's long history and their partnership with Alltech.