Resistance to Taura Syndrome Virus - Do Shrimp Get Enough Selenium? 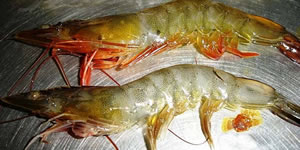 In humans, livestock and lab animals, improving selenium status increases resistance to viral disease; and work from Thailand reported recently in Science Asia shows a similar response in Pacific white shrimp exposed to the Taura syndrome virus (TSV). Importantly, the form in which selenium was added to the diet proved critical.

There were three diet treatment groups: shrimp were fed diets containing either no added Se (background level was 0.58 ppm Se) or an additional 0.3 ppm Se in the form of inorganic Se (selenite) or organic Se (Sel-Plex® Se yeast, Alltech Inc.). Shrimp growth was evaluated over a 5 week period, which concluded with a TSV challenge trial to gauge disease resistance and impact as measured by circulating hemocyte numbers, RT-PCR and survival rate.

In a pattern similar to trials in other species, both Se level and form had an effect with the Sel-Plex organic form having the greater impact. Sel-Plex Se improved growth, hemocyte (immune cells) numbers and survival after TSV challenge while inorganic Se improved survival to a lesser extent but had no impact on growth or hemocytes. Gill histology and RT-PCR confirmed reduced disease severity in the Sel-Plex Se group. 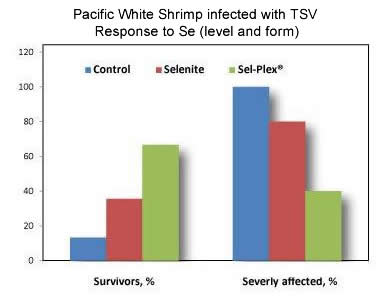 Viral virulence and disease severity are greater in Se-deficient hosts. Although not entirely understood, the relationship between Se and viral disease is thought to hinge on oxidative stress caused by free radical accumulation - a hallmark of viral infection. Free radicals are a normal product of oxygen metabolism, but toxic. Se-containing enzymes are critical in neutralizing them to prevent damage to cells. A deadly spiral occurs during Se deficiency whereby accumulation of radicals kills more cells (apoptosis), which in turn releases more virus to escalate disease severity in the individual and to spread within the population.

Are shrimp diets Se-deficient? Until recently, most of the industry assumed that the relatively high Se content of fish meal would adequately supply this micronutrient in shrimp feeds, but that opinion is changing rapidly. Higher growth expectations, production intensity and viral diseases may have increased selenium demand. In addition, the availability of Se in fish meal is not well described. The authors suggested that higher availability of the Sel-Plex organic Se might explain the difference in response to selenium source, which is more easily stored owing to its direct incorporation into tissue proteins.