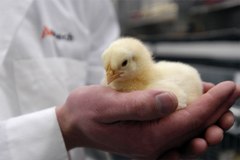 "Programmed nutrition defines the future evolution of the human race." This statement by eminent physician and scientist Peter Nathanielsz encapsulates the objective and intent of the seminar organized by the Alltech European Bioscience Center in Ireland on Monday October 10th. The program was attended by 140 nutritionists, veterinarians and production specialists involved in intensive livestock production on four continents.

The theme of the meeting was "Pushing the Boundaries-Performance and Profit" and the program was addressed by prominent scientists active in the field of epigenetics. This emerging discipline was defined by Dr. Karl Dawson VP and Chief Scientific Officer of Alltech as "The study of heritable changes in gene expression or cellular phenotype caused by mechanisms other than changes in the underlying DNA sequence." Basically epigenetics for livestock production involves the study of how gene expression can be modified to achieve benefits in terms of enhanced productivity.

At this stage research workers are applying advanced techniques including gene chip microarrays and next generation sequencing to define the mechanisms which allow modification of diets at critical stages in post natal development to influence subsequent performance. This process constitutes "programmed nutrition". Epigenetic effects are induced by methylation of cytosine, which is a building block of DNA. This chemical alteration will suppress gene activity inhibiting transcription, a necessary activity which is a precursor of translation of the genetic code to form a specific amino acid and hence a protein.

Alltech has initiated an intensive program of research under Dawson, involving the cooperation of scientist affiliated with major universities, to bridge known principles to practical nutrition. Some of the areas investigated which show promise include early nutritional conditioning of chicks with low levels of dietary phosphorus. Birds subjected to programmed nutrition function with higher levels of utilization of phosphorus allowing for lower specifications during subsequent growth and production. This has obvious environmental benefits. Other areas of research have evaluated conservation of dietary amino acids in diets by supplying lower levels of critical nutrients in pre-starter diets. Teams are also considering health effects and possible enhancement of quality of products.

Dr. Chris Ashwell of North Carolina State University is active in the field of programmed nutrition. He is working to understand mechanisms by which genes may be up- and down -regulated by early conditioning to achieve improved feed conversion efficiency. Currently he is studying chicken primordial germ cells and embryos to ascertain how gene expression can be differentiated and manipulated. He views the major challenges in applying basic research as data integration and annotation of genomes. His focus is currently the intestinal tract and how beneficial changes in structure and function can be induced by dietary conditioning.

The Alltech Epigenetics Symposium provided attendees with a glimpse of basic research which will radically alter our approach to feeding livestock and humans in coming decades. Epigenetics has the potential to enhance efficiency and alleviate hunger as we face the inevitability of burgeoning populations and limited agricultural resources. Alltech is proud to serve as the catalyst for this quantum leap in scientific nutrition.