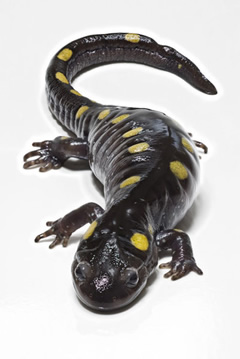 Some of the cleverest biotechnology solutions were developed long before humans invented microscopes and lab coats. At some point, the spotted salamander and a species of algae (Oophila amblystomatis) worked out a very green partnership. The salamander's egg capsules contain algae cells that surround the embryos. The algae, which are photosynthetic, produce oxygen and carbohydrates, which helps the embryos grow. In return, the embryos produce nitrogen-rich waste and carbon dioxide that the algae need. That is one of the most efficient waste treatment programs around.

This species of algae, whose Latin name means "loves salamander eggs" (seriously) does not occur anywhere in nature except in association with the spotted salamander and a few other amphibians. A Scientific American article describes the results of a recent study by Ryan Kerney and others that shows that Oophila also live inside the cells of salamander embryos. In fact, the algae were found in cells all over the bodies of adult salamanders as well. The salamander cells that include algae seem to be taking advantage of the algae's photosynthesis by surrounding the algae cells with mitochondria, which can turn oxygen and carbohydrates into ATP.

This is the first discovery of this type of partnership between an algae and a vertebrate. Corals have a similar symbiotic relationship with algae but vertebrates have an adaptive immune system that typically rids the body of anything considered foreign.

We may not want to explore intracellular algal invasion for humans just yet but we could take some lessons from this green partnership.

What do you think? Do algae have potential for recycling and remediating human, agricultural and industrial wastes?