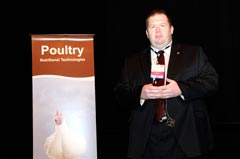 Dr. James Pierce of Alltech spoke to the Poultry group at Symposium this morning on potential uses for algae in human and animal health and nutrition. He talked briefly about the current corn shortage and the delay in spring planting due to the record wet weather. It is time to redesign our food production systems. A great deal of our corn is going into biofuel production. We have to start thinking of alternatives to traditional grains for animal feed. Algae can solve some of these problems.

The chemical composition of algae species varies greatly. Some species are high in protein, others are high in oil. Depending on the nutritional requirements, a suitable species can be chosen. Pierce compared the amino acid composition of algae meal to soybean meal. It is very similar yet it grows much faster. Imagine a field covered with algae tubes. The growth rates are 30 times faster than terrestrial plants and harvest rates are as short as 1 to 10 days. This means 300 times more oil per acre. As a bonus, we are rapidly and efficiently pulling carbon dioxide out of the air.

Algae can be a major feed component. It is being used increasingly in aquaculture but it is beginning to have a bigger role in other animal feeds. Algae can also be used to create functional, nutritional supplements. EconomaSe for instance is a natural additive the behaves much like vitamin E. DHA supplements are also typically algae based.

Do you think algae will be a major component of the animal feed supply in the next few years?